Thank You for a great summer season! 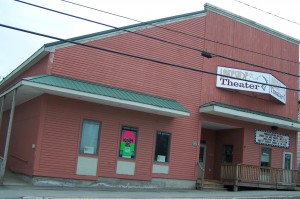 [News from 2014]
Inspiration and commitment by Rangeley Friends of the Arts has changed the fabric of our community and created an enhanced sense of place for the Rangeley Lakes Region.

The Rangeley Friends of the Arts invites the community to come to the Grand Opening at the RFA Lakeside Theater on May 24th to celebrate our NEW HOME.  There will be two opportunities to join the RFA Board in this celebration; Saturday afternoon 2-4 PM and Saturday evening 7-9 PM.  The reception will include refreshments, appetizers, docent-led tours of the improved facility, a glorious display of art work by the RLRS students and a small taste of the spring musical “SHOUT! The Mod Musical” at 8:30 PM. 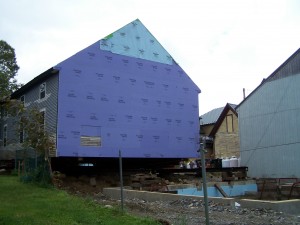 During the fall months of 2013, many exciting changes took place at Lakeside Theater, the new home of the Rangeley Friends of the Arts. 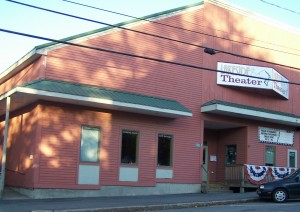 Thanks to longtime RFA supporters Jeff and Valerie Zapolsky, a trade was made so that the RFA could take over ownership of the theater and the Zapolskys would become owners of a lake front property formerly owned by RFA.  This most generous offer was hugely in favor of our organization and is greatly appreciated.  The entire community will benefit by having an arts center situated in the downtown area of Rangeley.

As part of the process, the old white barn that used to reside behind the theater was demolished and removed from the site.  The gray barn formerly belonging to John Parker was moved and set on top of a new foundation right up against the back of Lakeside Theater.  A construction crew under the direction of Randy Goodwin joined the two buildings together.

Some of the monumental upgrades to the benefit of Rangeley Friends of the Arts include:

During the first work party in January, a crew of 16 community members repainted the entire lobby area and organized costumes and set pieces.  More work parties will be planned for the spring.  We look forward to welcoming the public to an Open House in late May.  Stay tuned!