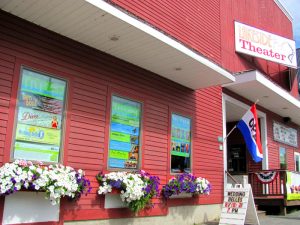 Rangeley Friends of the Arts

The RFA was established in 1968 and has sponsored a Summer Concert Series since 1969.  This concert series, which included artists ranging from classical to country, Broadway to bluegrass, has grown into a twenty event summer program of great variety as well as movies on the big screen.

In 1975, we expanded the program to include sponsoring performances by various artists for the youth of our community.  In 1985, this program was expanded to a full school series of several performances.  RFA works closely with the school administration arranging workshops and seminars by talented artists and performers.  Field trips to the Portland Symphony, Art Museums, Theatre at Monmouth, Portland Stage and the African Museum have greatly enhanced the lives of the students.

The RFA initiated the Student Lesson Program in 1980, assisting local students with the cost of private instruction in the arts.  This program is available to all students taking instrumental, piano, voice and dance lessons.  In 1988, RFA offered its first scholarship to a graduating senior from Rangeley Lakes Regional School who was continuing an education in the arts.  Since 2009, the RFA offered Drama Camp for students in grades 2 through 6.  In 2013 we added Teen Drama Week for students in grades 7 through 12. In 2016 we added the Westerhoff-RFA Music Camp for ages 8-18, and in 2017 we instituted our free Creative After-School Arts (CASA) program for students in grades 5-12 -everyday school-day until 5:30 PM.

The first local musical production was performed in 1976: a condensed version of a popular Broadway musical.  Since then, RFA has produced many full length musicals and plays.  RFA considers this effort one of the most important, as it involves the entire community in the arts in the most direct way; as performers and production staff as well as our audience. For a COMPLETE LIST OF MUSICAL AND THEATRICAL PRODUCTIONS, CLICK HERE.

RFA has a sound financial management system which has enabled us to operate in the black every year, including during the recent recession. With the acquisition of the Lakeside Theater in 2013, the organization is now taking on increased budget and responsibility, and consequently is playing a larger role in the vitality of Rangeley’s downtown.

Our home on Main Street has been filled with music, drama, movies and entertainment of all kinds, and in 2017 we added the Lakeside Contemporary Art Gallery.  Our primary focus: To transform the Lakeside movie theater into a welcoming, up-to-date Community Arts Center.  Hundreds of volunteer hours by the board and friends have assisted this process. Inspiration and commitment by the Rangeley Friends of the Arts has changed the fabric of our community and created an enhanced sense of place for the Rangeley Lakes Region. Grants from the Davis Family Foundation, Maine Community Foundation, Stephen and Tabitha King Foundation and many local donors have allowed us to improve our building, upgrade our live theater lights and sound, and upgrade to digital first-run movies! Come and enjoy an event this summer and help us celebrate our 50th year! REACH FOR AMAZING!

Donations to the RFA are tax deductible and greatly appreciated.  Thank you, and enjoy the upcoming season of performances and events.